Fifty-one years after his first hit of a drug, William “Al” Baker says he’s done with substance use and is into creating beauty.

“I believe in God and everything, but heroin always won out,” he said.

When Baker was around 9 years old, something happened to him that he doesn’t talk about. He started using substances three years later; marijuana, quaaludes, “whatever pill we could get our hands on,” he said, he used with his friends. At 16, he started using heroin. He said it made him stop caring about anything. It became his drug of choice.

His mother—a teenaged mom he said tied him to doorknobs so she could watch TV—allowed him to go to juvenile detention for a drug offense when he was 12 years old. That was the beginning of 25 years of imprisonment off and on – every offense related, in some way, to drugs. It didn’t matter. Prison isn’t a deterrent to substance abuse, Baker said, when you can get your fix while you’re locked up.

Baker had periods of sobriety, during which he felt a sense of purpose. At one point, he even became a counselor for people with addiction. When he picked up heroin again, he lost that job.

But even as his struggle with addiction over the long term continued, opportunity knocked.

“My mother always encouraged me to draw,” he said. “She used to take me to art stores because I would draw on anything I could get my hands on. [She’d say] ‘Stop drawing on my walls!’ I thought everybody knew how to draw like they knew how to eat.”

And though Baker continued using heroin in prison, he also continued his informal art education. There were other inmates with artistic talent, and he learned from them.

After a month-long drug relapse about three years ago, Baker’s wife and daughter decided he needed more support. They took him to St. Ann Adult Day Services, a program providing engaging activities and compassionate care for older Marylanders who need help, but not every day. Initially, Baker resisted going.

“I tried to get kicked out of the house,” he remembered. “I was cussing, being defiant. But they wouldn’t put me out.”

It didn’t take long for Baker to realize how much he loved the community at St. Ann. He started developing relationships with the staff, and being around other older Marylanders made him appreciate his health.

Still, with the traumas of his childhood, years of substance use and imprisonment, two shootings, and a stroke that resulted in an occasional stutter, Baker needed mental health care. The staff at St. Ann connected him to the Villa Maria Community Resources Behavioral Health Clinic in Dundalk and its supervisor, Emily Winicki. That’s when things started to shift inside him.

“If a hardcore guy like me can feel the things that I feel since I’ve been at St. Ann for the last three years and make me come back, that’s the hit right there,” Baker said. “The people there really made me feel like they cared about me. [St. Ann nursing supervisor] Danita got me in touch with Emily. Emily got me in touch with myself.” 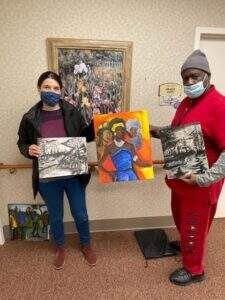 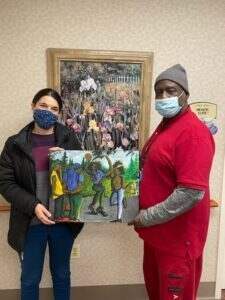 St. Ann also got Baker back in touch with his art.

The staff offered to buy some of his artwork to hang in the center, but Baker didn’t want money for it.

That’s when Winicki had an idea: to hang one of Baker’s pieces in the Dundalk clinic, so others who get help there can see the beauty that’s come from someone like them.

“They came to get one drawing and I gave them all of them,” Baker said. “They wanted me to sell everything because they considered it worthy, but I get a thrill from seeing somebody smile after I give them a picture. That’s how my gratitude runs.”

Knowing that others who struggle will see his art is a powerful feeling for Baker.

“It warms me tremendously. I hope they will find a better situation than addiction or whatever is happening for them.”